How does an illegal lane change warrant a trip to jail? No, there wasn’t any impairment. There wasn’t a weapon, an outstanding warrant, or any drug possession involved. We’re talking about someone who’s going the speed limit, changes lanes, and forgets to signal the change.

Imagine this: Within seconds of changing lanes, your rear view mirror lights up with red and blue flashing lights. You’re not sure why but you immediately pull over to the curb as you’re supposed to do. Nervously, you light up a cigarette as you wait to hear why you’re being stopped. Minutes later, you have an officer screaming at you, then ordering you out of your car. Seconds after that, as righteous indignation turns to terror, you’re ordered at gunpoint to the curb. 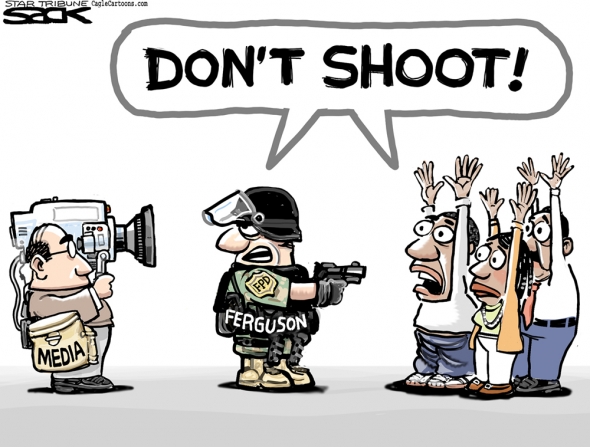 A really pissed off cop with a 9mm pistol pointed at you screams for you to get on the ground. Before you can comply, he smashes your face into the dirt.

You’re probably thinking that this couldn’t happen to you. After all, you’re not a criminal.   You’re not black. You’re an American citizen on US soil.  The black lady in the incident that I am talking about didn’t commit a crime either. Her transgression wasn’t even a misdemeanor or a violation of a civic ordinance. It was a traffic infraction of the very least significance.

And don’t think this doesn’t happen to white people too. It does. It’s just that when it happens to blacks, it’s more likely to make the news.   Media scrutiny over cases like these is bringing to light a growing problem in our country, which is disregard for due process and civil liberties by authorities. It’s not a new problem but it’s one that we’re finding is more prevalent that most would imagine.

Okay, I realize that last statement is a generalization. Not all cops go crazy like the arresting officer in the Sandra Bland case or the officer that pointed a gun at an unarmed teenager at a pool party in McKinney, Texas and wrestled a 14-year-old girl to the ground. Most cops wouldn’t think of shooting an unarmed man eight times in the back as he ran away from a car stop. Most wouldn’t shoot a 12-year-old boy brandishing what turned out to be a toy gun, like one did in South Carolina, without some attempt to remedy the situation before using deadly force.

The overwhelming majority of police officers are courteous, professional, and treat the people they encounter with respect. And then some do not. 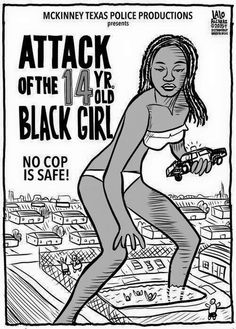 The proliferation of smart phones with built-in video cameras has brought to light a lot of abuse of authority that would have otherwise gone unreported. It’s rather difficult to dispute video taped evidence just as it is eyewitness testimony.  And for those who would abuse their authority, the body camera also makes a questionable incident more likely to come under review.

I think Hollywood is responsible for a lot of what’s happening in law enforcement. A third of our entertainment programs are cop shows. People like seeing the bad guys get nailed. They’re frustrated by rampant crime and seeing the perpetrators walk away without consequence – time and time again. The excitement of seeing a bad guy not only get caught but getting the living shit kicked out of him is exciting entertainment.

The person watching the cop show on television gets to see the bad guy commit the crime. There is no doubt in their mind that he’s guilty because they saw the incident happen right in front of them. So, when the cop smashes the guy’s face into a wall because he beat his wife and abused his kids, they cheer.   The problem is, in real life the offender is only suspected of a crime until such time as the courts determine otherwise.   Even in a case where the arresting officer sees the crime occur and has no doubt that the suspect is the offender, his job isn’t to hand out justice. His job is to apprehend the suspect, where that is warranted, collect evidence, and refer the case for prosecution.

In the movies, the end justifies the means. Criminals get off because they have crafty lawyers who use the Constitution and due judicial process to their client’s advantage. Cops catch them, judges let them go. At least that’s the story that keeps getting repeated in the media. It must be true, right?

In real life, most people charged with a serious crime can’t afford a lawyer, especially one that’s likely to use Hollywood-style legal wizardry to get them off. At best, they will get a public defender who will work to get them the least amount of punishment regardless of their guilt or innocence.

So, if a cop has to oil the wheels of justice by beating a confession out of someone, well, they were guilty to start with, right? No warrant? Kick the door down anyway. Tell some lie about hearing a smoke alarm going off on the other side of the door. That’s what they do in the movies. We all watch and applaud our favorite hero when he drags the beaten and limp body of a suspect into the station house and puts him in a little room for more questioning.

The presumption of innocence is one of the things that sets American justice apart from what exists in other parts of the world. When you think about it, would you want it any other way? If someone is going to punish you for something, shouldn’t they have to prove that you did it? Or should their opinion that you are the most likely culprit be all that’s required to send you to jail?

Even when there is eyewitness testimony, there is also a requirement for due process. Due process means that there is a set of defined steps that must be taken during the course of prosecution. This ensures fairness and preservation of one’s civil rights.

Police officers have a dirty job. In some ways, it’s like being a trash collector. Trash collectors know they’re going to be handling garbage, which is why they wear gloves. Police officers deal with the dredges of society. They routinely have close encounters with people who have no compassion, no empathy, and are motivated by self-gratification and greed. Some of the time, cops know what they’re dealing with as soon as they make contact with an individual. They may not be able to determine guilt or innocence in the immediate matter at hand, but they know a trash can when they see one.

While there isn’t any doubt that being a police officer is dangerous, a trash collector is three times more likely to be killed on the job according to the Bureau of Labor Statistics.  Trash collectors don’t show up at your door with an AR-15 assault rifle and dressed in military gear.  It the majority of the cases, the Rambo gear is unwarranted and is only there to intimidate and emphasize the authority of the individual wearing it. 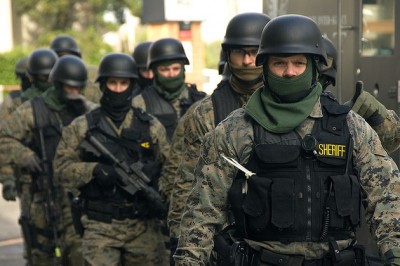 Police officers also encounter ordinary citizens – some of who find themselves in precarious positions or are just having a really bad day. Since it’s not always possible to know the difference between a criminal and an innocent civilian each and every time, treating everyone with the same courtesy and respect is the only fair way to start off an encounter.  Due caution is a bulletproof vest and a cautious approach — it isn’t an armored personal carrier, camouflage fatigues, and full body armor.

There is a tremendous amount of authority bestowed upon those who patrol our streets and keep us safe. When there is a conflict in testimony, the veracity of a police officer will usually trump even that of even a parish priest. A cop can put handcuffs on the CEO of a Fortune 500 company and take him to jail if the situation warrants that. He can use lethal force in the event that his own life, or someone in his vicinity, is threatened. Taking someone’s freedom, even temporarily, and certainly taking someone’s life, is an awesome responsibility.

More and more we’re starting to hear about cops being held accountable for their actions. Unfortunately, when there’s a lack of accountability, there’s a lack of trust. People fear being pulled over by the police – oftentimes when they have nothing to fear at all. It shouldn’t be that way.

Nobody would watch cop shows if there weren’t the dramatization of the legal process. It would be dull and mundane to see how the justice system really works. Who wants to sit through several episodes of grand jury testimony, bond hearings, and pretrial conferences. It’s much more entertaining to watch a cop get into a fist fight with a guilty suspect after a five-mile pursuit that resulted in a dozen or so traffic violations and several collisions, guns blazing along the way.

We can be entertained by the movies but we must be discrete enough to know what to expect as a result of the sacred trust that we put in law enforcement. And when that trust is violated, we have every right to demand justice.