Over thirty-five years ago, Arizona voters passed a measure that put a one percent cap on property tax. Knowing from experience that our elected political heroes at the county level would tax the population out of existence if given the chance, voters did what they could to make sure this didn’t happen. Own a home worth $150,000? Your tax bill won’t exceed $1,500 per year. Simple as that.

If the actual cost of services exceeded that amount, the state picked up the tab. Not anymore. Now, without a cap in place, the county gets to charge whatever they feel like they can collect from the property owners. Oh yeah, I have heard it put this way: 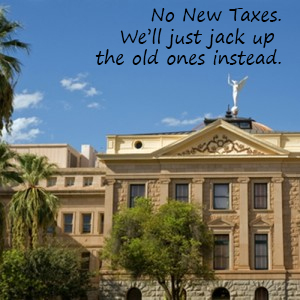 “Ducey and the Legislature decided to eliminate that cap, which basically passes that additional tax burden to cities and counties”.

That’s pure, unaltered, USDA approved bovine fecal matter, to state it nicely. Tax is tax. The state keeps what they’re already getting, from whatever sources. They give less of what they receive to the counties, which then decide to get it from the homeowners, now that the cap on property tax has been eliminated. See how that works?

I agree with the governor that a balanced budget is a necessity in government just as it is in business. However, when business exceed their revenue with expense the cut back on expense. Governments just collect more revenue.

Pete Rios, vice chairman of the Pinal County Board of Supervisors, has said Ducey and the Legislature may have passed a balanced budget, but they did so on the backs of cities and counties. Pete Rios is a liberal Democrat who never met a tax he didn’t like. Pete sees the solution to rising expenses as an equal or greater tax increase. It never occurred to him or his compatriots on the Board of Supervisors to look for ways to decrease expenses rather than raise taxes.

In fact, Pinal county is so anxious to raise your taxes that they are not even going to wait to see how much the impact really is. Pinal County will pay its share of almost eight million, and the rest will be paid by Central Arizona College District and cities in Pinal county. How much of that burden will be spent by each entity will be determined by the Property Tax Oversight Committee.  If that doesn’t scare you, it should.

Pinal county needs to pass a budget by June, so it’s guessing at the figure that needs to be paid. They guessed $2.8 million stating that they didn’t know what they would do if the actual amount exceeded that. They may not know what they’ll do but I do. They will jack up your taxes to cover the difference, just like they always do.

School districts have a lot of influence on the determination of tax rates. Maricopa Unified School District has one of the highest tax rates in the state. The rate, set by the school district, must be approved by the Board of Supervisors. If that doesn’t scare you, it should.

The City of Maricopa used to have a budget of around $300,000 it passed out each year to local nonprofits. This year, the City isn’t being so generous. They want to wait and see what’s left over after each of the jackals rip their share from the carcass of available revenue. That may be a good thing. I don’t see why the government should be taking part in the redistribution of wealth anyway. If a nonprofit group needs revenue, let them use private fundraising to obtain it. That way, the value that people see in the nonprofit groups work is determined by the people, not by the city council.

You’re going to hear crying, the tearing of clothes and the gnashing of teeth coming from municipalities and school districts when they get their final numbers and realize it’s something less than they got last year. Staffing levels will be cut. There may be a zombie apocalypse and there won’t be enough police on the street to combat the hordes of walking dead. Children will become instantly stupid when funding for schools is cut even a penny.

Here’s a history lesson: On June 6th, 1978, nearly two-thirds of California’s voters passed Proposition 13, reducing property tax rates on homes, businesses and farms by about 57%. Prior to Proposition 13, the property tax rate throughout California averaged 3% of market value. Additionally, there were no limits on increases for the tax rate or on individual charges. Some properties had been reassessed 50% to 100% in just one year and the homeowner’s property tax bills increased accordingly. Under Proposition 13 tax reform, property tax value was rolled back and frozen at the 1976 assessed value level. Property tax increases on any given property were limited to no more than 2% per year.

There was no zombie apocalypse. California is still there today, still weird as ever but still there.

This isn’t over. Pima county has filed a lawsuit in the Arizona Supreme Court seeking to block implementation of the plan until something can be worked out. You can bet that you’ll need to bring along family sized bottle of Vaseline when they tell you what that something is. The Pinal County Board of Supervisors, in a stunning display of incentive and leadership, decided to ride along with Pima county as a “friend of the court” rather than taking any action on their own. Give your county supervisor a pat on the back for taking the initiative next time you see him.

When you’re tired of pats on the back, you can award a swift kick in the ass to State Sen. Steve Smith, R-Maricopa, who did little more than watch the whole thing happen. In fact, he commented that the cap was unfair to the other 13 counties in the state who would have to fund some $25 million owed to Pima and Pinal counties. Tell Steve how proud you are of him for representing every county in the state except the one he’s been elected to represent.

Finally, print out a copy of this blog and bring it with you to the next election when you’re asked to vote for a school bond override or retain one of our elected political heroes in office.