Last month I wrote about the fifteen dollar minimum wage being demanded by fast food workers everywhere. It seemed strange to me that a burger flipper in Manhattan is asking for the same $15 that a worker in Norman, Oklahoma, where the cost of living is about twenty-five percent lower. I don’t expect these guys to be economists. I don’t even expect them to be good at arithmetic. In fact, I don’t expect them to be good at anything except for menial and closely supervised tasks.  That’s why fast food workers have pictures of the food item on cash register keys.

While we may not expect them to be capable of doing anything else, that doesn’t mean that’s all the typical minimum wage earner is capable of.  Most are capable of much more and their minimum wage job is a stepping stone to bigger and better things.  Students and others with full-time commitments use these jobs to either earn extra income or bridge the time until they’re qualified and ready for more rewarding employment.  Many of today’s executives started behind the counter of a fast food restaurant.  These jobs were never intended to be a career or to provide a living wage for a family of six. Some folks never got that message. 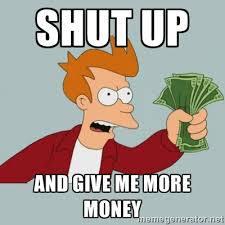 It seems that the Progressives were listening carefully to the cry for more money from the masses. Now, the Democratic Party platform calls for a $15 per hour national minimum wage for all hourly workers. (Note that I blatantly bolded some key words. We’ll get to those in a minute). Based upon a 30 hour week, that would put flippers, lawn mowers, car washers, and Wal-Mart greeters at over $31,200 per year based upon a 40-hour work week. But wait, there’s more.

Here’s why I bolded a few words in the previous paragraph: According to the Bureau of Labor Statistics, the average non-supervisory hourly employee works over four hours of overtime per week. That’s an additional $4,680 per year, which brings our minimum wage earner up to a minimum of $35,880 per year.

A person graduating with an Associate’s Degree will start at around $31,400. A BA will get you $36K to start. Looking at the $35K that the minimum wage earners will be making if the Democrats get their way, it would make sense to skip college, forego the student loan, and just go to work for minimum wage. And you can bet that the minimum wage in high cost of living areas like San Francisco or New York City are going to be much more than 15 dollars once this thing gets implemented.

The cries for a $15 minimum wage are in keeping with the activist left and the labor movement. I’m not sure there is a whole lot of difference between the two, but for now I will give them the benefit of distinction. This proposed increase will more than double the existing federal minimum wage of $7.25 per hour. It will lead to a significant number of job losses and stifle small businesses. You can bet that it will raise the price of goods and services.

So, now that the minimum wage earner is getting $15 per hour, he can expect his rent to go up, the cost of the burger he’s flipping to double, an increased grocery bill, higher medical costs, etc. He may be getting more money but he’s probably going to have more coming out of that big paycheck. The cost of day care alone, which is largely based upon minimum wage, will double. 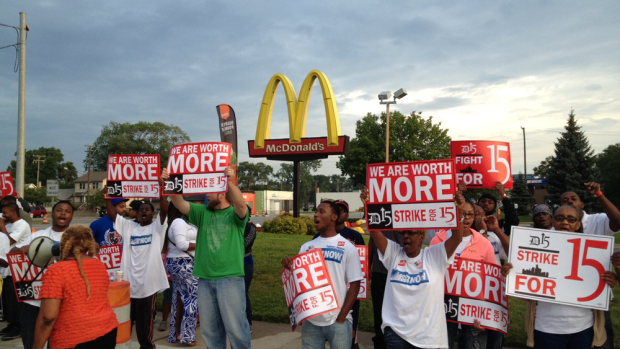 So where’s all this crap coming from? Let’s start with Christine Pelosi, a DNC delegate from California. If the name sounds familiar, it’s because she’s the daughter of the House Democratic leader. Christine co-authored the $15 minimum wage resolution that passed this week and is now a plank on the Democratic platform.

Ask a Democrat and he will tell you that this position is a matter of principle. Democrats always stick up for the little guy, right? Ask me and I will tell you that it’s a desperate attempt to buy votes by bringing out the youth and minorities, those close to the bottom of the salary scale. Once again, we see the Progressives selling what people want to hear in an attempt to keep themselves in office. I have not heard a word from Democrats on where they think the difference in pay is going to come from.

As the cost of goods and services rise in response to higher labor costs, Americans will buy less, causing  a drop in production and a loss of jobs. Elective spending, like meals in restaurants, will be much more infrequent, and the first to go, causing a loss of jobs in the food service industry. 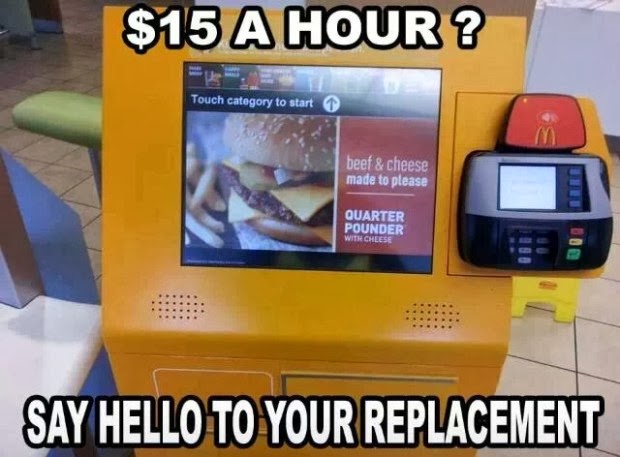 Ironic that the workers who started the cry for more money are going to be the ones that are impacted the most.

It won’t stop there either.  By raising the minimum wage, the federal government would be encouraging industry to automate things.  Nobody will be safe.