Back in the 18th century, flintlock firearms had a ‘cock’, or striker mechanism, which when discharged would make a spark to ‘fire’ the gun. These could also be set at half-cock, so that the gun was in a safe state, or at full-cock, when it is ready to be fired. A gun would only ‘go off at half-cock’ by mistake.

We now commonly use ‘going off half-cocked’ to mean ‘speak or act impulsively and without proper preparation’.   There are a small group of individuals with a large amount of time on their hands who have gone off half-cocked, armed with misinformation, and are trying to stop any progress from being made on Palo Verde Regional Park.

In today’s world, it doesn’t take much effort to spread misinformation.  All you need is a little paint and a few sheets of plywood and the propensity to cry wolf when none are present.  It’s true that sometimes fiction is much easier to believe than fact.

The truth is that there is no government conspiracy to take our land.  Rather, government, through the Pinal County Open Spaces and Trails Master Plan, is trying to plan recreational areas for our future.  Arizona comprises almost 73 million acres of land, much of it managed by the Bureau of Land Management.  Pinal County lays claim to 3.4 million acres of this land and is the third most populous county in the state.  It would stand to reason that county government would plan for public recreation on some of this land.  No conspiracy there.

The conspiracy theorists would have you believe that the county intends to put a fence around the area and charge admission to anyone who wants to enter.  While there will be day use fees for certain activities, like camping or use of the rifle range, there will also be areas where people can enter and use the trails free of charge. 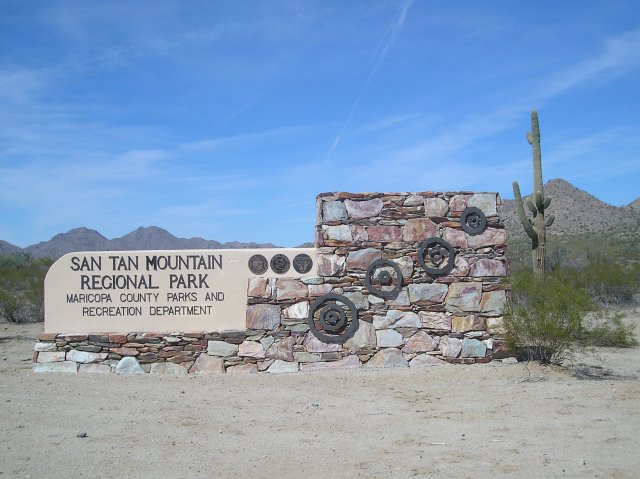 I don’t see a fence or toll booth in this picture.  Do you?

There has been more transparency in the master plan than anything I’ve seen a government agency do in recent history.  Despite the fact that there have been meetings, notices, publications, and an extensive web site with maps, pictures, and videos, the is still the insinuation by a misguided few that there’s some secret plan.   Now the untruth being spread is that the park master plan is a precursor to annexation of the Hidden Valley and Thunderbird Farms areas.

The problem with that theory is that annexation of the rural area surrounding Maricopa would have to be initiated by the residents, not the city as it was attempted in the failed and mistaken 2008 attempt.  Second, annexation would be into a city whereas the park is being planned by the county.  It’s really easy to write an interesting story when you’re unencumbered by the facts.

The fear of annexation would only be a factor for those in the unincorporated areas.  What about the tens of thousands of residents living in Maricopa, Stanfield, or Goodyear?  Do they have a say in the matter?

Another untruth is that taxes would be raised if the park were to be established.  The tax money concerned here has already been collected, or will be collected, and generally involves impact fees for new development.   Parks will be built regardless – the only question is where.  There are multiple sites throughout Pinal County that have been identified by the Trails and Open Space Committee.  If a park isn’t developed here, it will be developed elsewhere and somebody else will get the economic, ecological, and recreational benefit.

I’m still curious about why someone would go to the time and expense to try to side rail the plans for a managed open space.  The first question in mind is: What’s in it for them?  Could it be just the unwillingness to pay a nominal day use fee for the services that require such a fee?  Perhaps being able to have target practice anywhere and know that there’s very little regulation or oversight to prevent destruction and an abundance of trash as a result.    Maybe cutting their own trails through environmentally sensitive desert land unencumbered by park patrols is the reason.  Whatever it is, you can be sure that those reasons are to benefit the few, not the many. 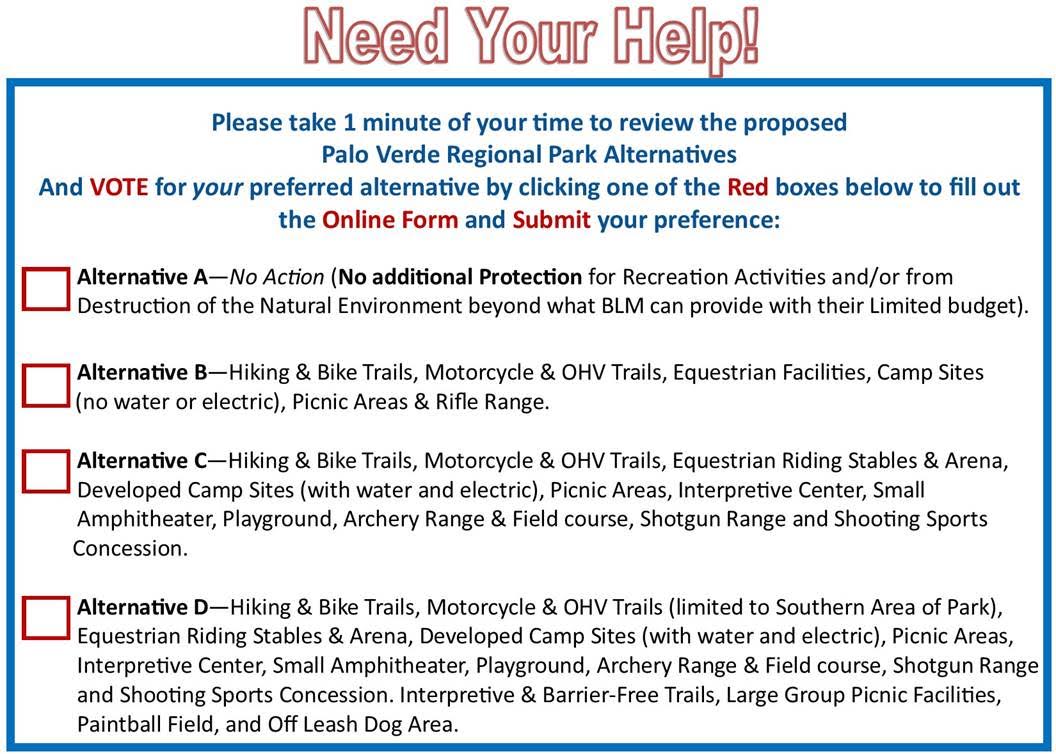 There are four options under consideration.  Option “A” leaves things pretty much the way they are.  The other three options add increasingly more development and recreational opportunity.  If you haven’t done so yet, visit this site and make your voice heard. Be heard.  Oh, and we don’t have wolves in this area.  It’s the coyotes you need to be worried about.  They make a lot of noise but there is very little worthwhile information.

Here are some links to the truth about Palo Verde Regional Park.