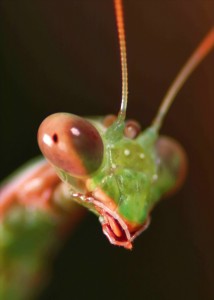 Article and Photos by Steve Miller

The praying mantis’ looks are deceiving.  It moves about slowly, almost reverently.  It appears to kneel in prayer, lifting its front legs much like human arms, folding its “hands” in prayer.  It’s the only bug on the planet that can swivel its head from side to side in a human like motion, slowly and deliberately.  As I photographed this “gentle” creature, I was amazed at the mannerisms that reminded me of a gentle Buddhist monk.

Despite their appearance and behavior, they’re anything but gentle.  Watching a mantis in close proximity to a cricket gave me insight into the vicious nature of this insect. Once it became aware of the cricket, the mantis stood on a limb completely still. With the exception of its head moving, looking, assessing the surroundings, it was motionless.  Meanwhile, the cricket wandered aimlessly throughout the area, oblivious to the looming threat.  The mantis just waited patiently for the cricket to come close enough and BLAM!  It pounced at lightning speed.  Mantis are not hunters.  They let the prey come to them. END_OF_DOCUMENT_TOKEN_TO_BE_REPLACED