Arizona State Senators John Kavanagh and Steve Smith would like very much to see the police in our state operate in complete secrecy.  No accountability.  No publicity.  After all, police work is much more efficient and effective when it is not encumbered by the United States Constitution.

A proposal by Kavanagh, R-Fountain Hills, would make it against the law to shoot video within 20 feet of any “law enforcement activity” unless the officer first gave permission. A first offense would carry a $300 fine, with subsequent violations potentially sending someone to jail for up to six months. 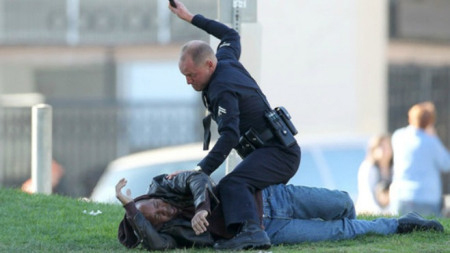 John Kavanagh, a Republican who is also a retired cop, said such a law is necessary for officer safety.  What are we supposed to do, get out a tape measure before turning on the camcorder?

He said he does not see a problem that such a law would make it illegal for citizens to record their own interactions with police, stressing that citizens do not have that right, despite the numerous court rulings that disagree.  Sounds to me like it’s to hell with protecting citizens, we need to be protecting cops. END_OF_DOCUMENT_TOKEN_TO_BE_REPLACED